Monmouth University’s nationally competitive field hockey program has a long winning tradition as Metro Atlantic Athletic Conference regular-season champions in 2014, 2015, 2016 and 2017. Now, with a new FieldTurf field, the Hawks also boast a playing surface worthy of such a premier team.

In July 2018, Monmouth replaced the dated AstroTurf system with FieldTurf’s premium Hockey Gold system, which is designed for the highest levels of field hockey competition.

The Hawks took to Twitter to announce their field upgrade: 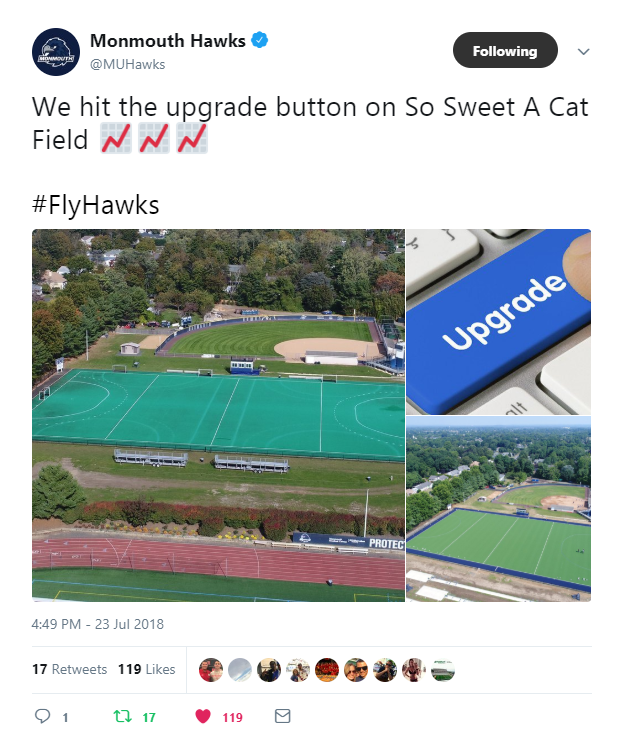 “This is a great day for Monmouth field hockey, we are thrilled about the next chapter for our program,” commented Jeffrey Stapleton, Deputy Director of Athletics for Monmouth University. “Four players showed up to play on it immediately after it was installed and loved it. We look forward to seeing our student-athletes playing on FieldTurf for years to come.”

FieldTurf’s dedication to the sport can be seen by our designation as an International Hockey Federation (FIH) Preferred Supplier as well as our partnership with the National Field Hockey Coaches Association (NFHCA) to help grow the game domestically. These entities are dedicated to protecting players and the surfaces on which they play. Delivering the highest quality, superior performing and safest artificial turf systems has always been FieldTurf’s core mission.

“We believe that the long-term success of our sport lies in the quality of hockey facilities around the world,” says Kelly Fairweather, FIH’s chief executive officer. “We want to create international standards ensuring the sustainability, affordability and accessibility of hockey fields.”

“FieldTurf’s unique and innovative products greatly contribute to the development of field hockey in the United States,” says NFHCA Executive Director Jennifer Goodrich. “We look forward to assisting FieldTurf in its efforts to expand its field hockey presence at the college, high school and club levels.”

In comparative testing, FieldTurf’s Hockey Gold system proves to be 80% less abrasive than knitted nylon carpet. That’s because this player-friendly surface is built with a uniquely engineered, tufted polyethylene fiber that has become the global standard — even as nylon systems still dominate the U.S. market. Not only is polyethylene less abrasive and more flexible for players, but it’s also just as strong as nylon in terms of general wear resistance.

Like all FieldTurf systems, Hockey Gold was developed after extensive consultation with field hockey players, coaches and other experts in the sport to ensure the product delivers playability characteristics geared for the highest levels. Hockey Gold was perfected for field hockey by focusing on four key sport-specific elements:

No wonder FieldTurf is the surface of choice for hundreds of elite field hockey programs worldwide, including those affiliated with the NCAA, European Hockey League and World Series Hockey.