The former turf to be fully recycled during the replacement, highlighting FieldTurf’s and AMB Sports and Entertainment’s commitment to sustainability

A new FieldTurf CORE surface has arrived at Mercedes-Benz Stadium, home of the NFL's Atlanta Falcons and Atlanta United of Major League Soccer.

FieldTurf has been the surface of choice at the venue since it opened in 2017, and previously at the Georgia Dome.

“Mercedes-Benz Stadium is an iconic world-class venue and we’re honored to be the surface of choice.” Said Eric Daliere, President – Tarkett North America & Tarkett Sports. “As FieldTurf is also based in Georgia, our relationship with AMB Sports and Entertainment is of great pride for our team and is celebrated by cheering on the Falcons, United and numerous events held at the stadium. We’re excited to continue to work with their team and deliver our renowned CORE system, which delivers leading performance, playability and safety.”

When crews removed the existing FieldTurf surface at Mercedes-Benz Stadium to install the new CORE field — the infill was removed for future use, and the carpet was transported to FieldTurf’s recycling partner. There, proprietary technology removed any remaining infill to produce a clean blend of the face and backing fiber polymers. The clean blend then was pelletized and transformed into pallets, composite wood for decking and siding, and advanced chemical recycling. All components of the field avoided being sent to landfills in the replacement of the surface. 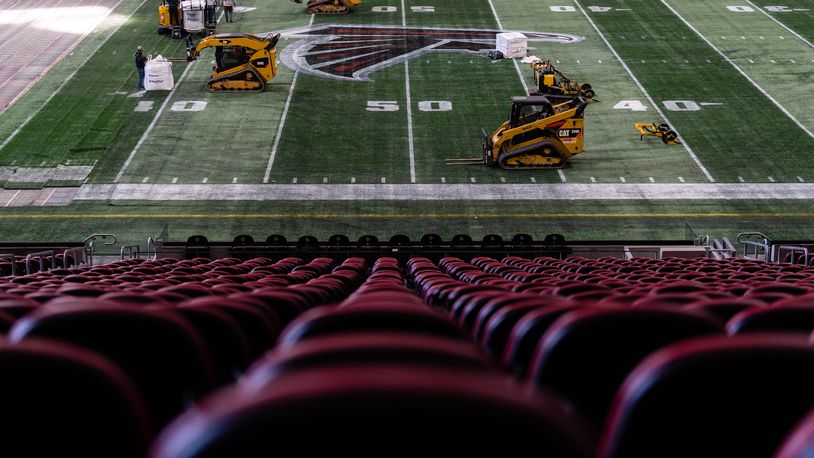 It’s all part of FieldTurf’s Sustain the Game program, a sustainability commitment focused on building for tomorrow. The program aims to offer surfaces that have the lowest impact on people and the planet. Carpet and infill recycling is available on all FieldTurf projects, but the initiative at Mercedes-Benz Stadium, to have the entire field recycled, is a great demonstration of FieldTurf’s commitment and capabilities and AMBSE’s pledge to operating Mercedes-Benz Stadium at the highest sustainable level.

In the NCAA, over 1500 programs trust FieldTurf of which includes powerhouse football programs Michigan, Notre Dame, Ohio State and Oregon to name a few. Locally, FieldTurf has installed over 250 installations in Georgia of which features Georgia State University, University of North Georgia and Reinhardt University, to name a few.