This system is designed specifically for the highest levels of field hockey play. Built with Elliptic monofilament fiber, which is engineered with the same durability characteristics as FieldTurf’s other surfaces for football, soccer and other sports, Hockey Gold also boasts a perforated backing and a water-based infill that allows for maximum performance. 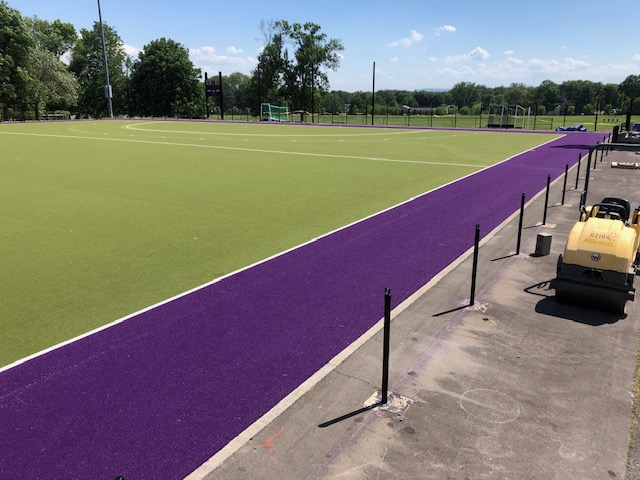 "We are beyond excited for the arrival of our new Hockey Gold field. I’m confident that it will have a major impact on our program. Our players will benefit greatly by training and playing games on the surface, recruits will be drawn by how eye catching it is and I feel like every University who plays us at home will want to copy what we have when they are in the market for a new field." Phil Sykes, Head Coach, University at Albany.

FieldTurf is designated as an International Hockey Federation (FIH) Preferred Supplier and has partnered with the National Field Hockey Coaches Association (NFHCA) to help grow the game in the United States. Both the FIH and NFHCA are dedicated to protecting players and the surfaces on which they play, and delivering the highest quality, superior performing and safest artificial turf systems has always been FieldTurf’s core mission.

In comparative testing, FieldTurf’s Hockey Gold system proves to be 80% less abrasive than knitted nylon carpet. That’s because this player-friendly surface is built with a uniquely engineered, tufted polyethylene fiber that has become the global standard — even as nylon systems still dominate the U.S. market. Not only is polyethylene less abrasive and more flexible for players, but it’s also just as strong as nylon in terms of general wear resistance. Like all FieldTurf systems, Hockey Gold was developed after extensive consultation with field hockey players, coaches and other experts in the sport to ensure the product delivers playability characteristics geared for the highest levels. Hockey Gold was perfected for field hockey by focusing on four key sport-specific elements:

FieldTurf has emerged as the surface provider of choice for hundreds of elite field hockey programs worldwide, including those affiliated with the NCAA and the Euro Hockey League. Find out about FieldTurf Field Hockey here.