Together, Guzman & FieldTurf Are Helping Grow the Beautiful Game

Julian de Guzman represented Canada on the international pitch 89 times. This number of ‘caps’ is the highest ever gained by a Canadian player and will likely remain so for an extended period of time. A storied career which saw him play for Canada in multiple FIFA World Cup qualifying series, many will remember his performances during the 2009 CONCACAF Gold Cup when he was named as the Continental Tournament MVP.

His club career was equally, if not even more historic. Growing up and playing youth soccer in Toronto, he was spotted and signed in 1997 to a professional contract by France’s Olympique Marseille. Three years later saw him moving on to Germany for 5 years with FC Saarbrucken and Bundesliga club Hanover 96. His performance at Hanover caught the eye of many and in 2005, he became the first (and still the only) Canadian to ever play in Spain’s La Liga, when he signed on with Deportivo la Coruna. He immediately assumed a position of leadership by not only helping the club to avoid immediate relegation but also be then leading the club to a UEFA Cup position in a remarkable 2007–2008 season. For this, he was named the team's “Player of the Season”. A creative midfielder, he scored one goal which just happened to come against Spanish giant Real Madrid.

He returned home to Canada in 2009 to play for three seasons for Toronto FC in MLS and one final season in Dallas. Two more seasons in Germany and Greece then saw de Guzman sign for NASL Ottawa Fury in 2015 where he ended his playing career in 2017 and became General Manager of the club for its final seasons in 2018/19.

Remaining in Canada’s Capital city, he has become a leading television analyst with TSN, providing network commentary for both Major League Soccer coverage of Toronto FC and Vancouver Whitecaps while doing double duty for the recently completed Euro 2020 championship as well. At the same time, he has joined a local investment group, consisting of members of the business and amateur soccer community, which has acquired the property, the home of the Maple Leaf Almrausch German Club. The development will be led by ASL Contractors, a pre-eminent local earthworks expert and a leading landscape contractor in the National Capital Region. An arrangement which benefits all parties, the local German society has been provided significant support to keep on with its social activities while also expanding its key soccer operations.

And critical to this is the construction of and installation of a FIFA Quality Pro soccer pitch on the grounds of the club. With construction now underway, FieldTurf’s elite CORE turf system has been selected for the project.

“We really do want to build a local ‘field of dreams’ to meet the demands of the local soccer community,” stated de Guzman. “Having played on the FieldTurf playing surface at Ottawa’s TD Place Stadium for three years, we knew this was the best product around. And then seeing the new CORE surface installed last fall at the stadium simply re-confirmed our belief. The heavyweight infill combined with this new fibre really gives us confidence moving forward with the project.”

The project is now under construction with completion set for October and will be installed by FieldTurf Distributor LML Paysagiste. 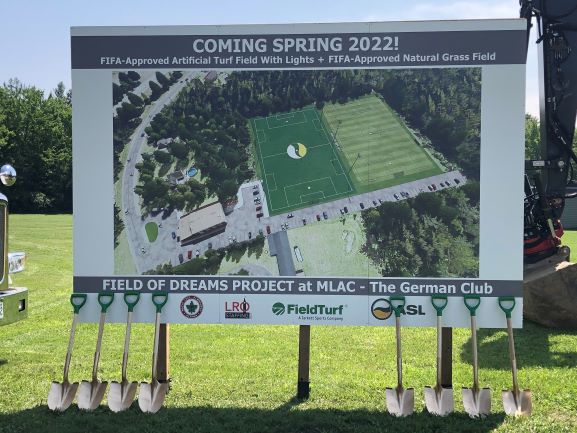